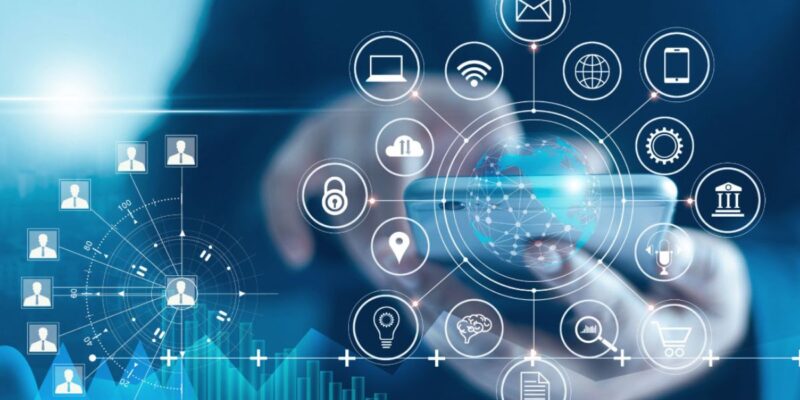 Cryptocurrencies like Bitcoin (BTC) and Ethereum (ETH) have been attracting general interest for some time. But they can only be realized through blockchain technology, which can be applied to many different areas.

When the person or group of people, who has remained anonymous to this day, called themselves “Satoshi Nakamoto”, implemented the Bitcoin software in 2009, it was the starting signal for the world’s first publicly accessible blockchain.

Why do you want to invest money?

Put; a blockchain is a digital and decentralized database or register that can be expanded chronologically and linearly with new data or information. For this reason, one speaks of a chain that keeps getting longer.

People often speak of “the blockchain”. This is misleading because there is no such thing as one blockchain. Any number of blockchains can be created. For example, each cryptocurrency has its own blockchain.

In principle, any digital (or digitizable) information can now be recorded and secured with a blockchain.

The technical innovation of blockchains is that the recorded information is valid and transparent, while users remain completely anonymous and can interact directly with one another. So far, this has been a contradiction.

This can best be illustrated using currencies: the transfer of fiat money is only possible with a personalized bank account. In this way, intermediary banks can check and safeguard the correctness of the transaction.

Units of a cryptocurrency based on a blockchain, on the other hand, can change hands via wallets without their identity being known. Still, the transaction is valid and secure. In addition, no financial institution is required to secure the corresponding transactions. This is also an absolute novelty.

How does this work?

Simple explanation: This video explains briefly and clearly how this works without going into too many technical details.

What are the advantages?

Blockchain is on everyone’s lips and across all industries. But why is the new technology causing so much enthusiasm?

In principle, independent parties who do not trust each other are allowed to conclude agreements – even without involving a third party. In this way, immense sums of money could be saved in the future and economic processes accelerated. And that makes blockchain interesting for many companies.

In the follow-up study, This assumption is confirmed: The 1,500 executives surveyed have lost their doubts in 2020. They use blockchain technology and see it as an integral part of entrepreneurial innovation.

Tech giants Facebook and Google also want to use blockchain potential. Facebook founded its own think tank to examine the possible uses of the technology and is also planning its own blockchain-based cryptocurrency with “Diem” (formerly “Libra”). Google, on the other hand, is currently working on making blockchains searchable with the “Blockchain ETL” tool.

The unbridled enthusiasm for new technology can lead to future developments being assessed disproportionately positively. That such a process can have unpleasant consequences was felt by numerous small investors in 2000 when the dot-com bubble burst.

Because of the complexity in the blockchain area, it is difficult to assess whether a new business idea, company formation or initial coin offering ( ICO ) is about the next big thing or hot air.

For this reason, the Hasso Plattner Institute for Digital Engineering carried out a study in 2018 on the subject of “Blockchain – Hype or Innovation” carried out and published. The study classifies many of the numerous expectations placed on blockchain technologies as exaggerated. Nevertheless, the institute’s researchers see a wide range of potential if initial weaknesses in blockchain technology are corrected.

On the technical side, the disadvantages mentioned include inadequate standardization and the inability to work together between different systems. In addition, drastic power consumption is a major obstacle.

Overall, according to the study, the technology is still in its infancy but could be used in many areas and industries in the future.

4 | In which areas can blockchain be used?

The study by the Hasso Plattner Institute came to the result that contracts secured in a blockchain, so-called smart contacts, could unfold a wide range of possible uses.

Smart contracts enable the secure exchange of data and the management of digital identities. For example, they could be used to rent out real estate digitally and save time, trade works of art or manage health data.

Blockchain could also offer good solutions in the logistics sector. The city of Dubai announced that it wanted to handle all supply chains automatically using a blockchain.

The following list contains a selection of other areas for which blockchain solutions are conceivable and are currently being discussed:

5 | How secure is blockchain?

Even if the implementation of blockchain technology in these areas has so far been more discussed than implemented, the question of any security gaps arises.

Security is guaranteed by the decentralized storage and validation of the blockchain. In theory, the stored information can still be manipulated if more than half (51%) of the decentralized network can be hacked. In this way, a manipulated file could be recognized as the correct one because it would be represented most frequently. However, since such a state is tough to achieve, a blockchain is generally considered secure.

The greatest uncertainty currently arises from the constant further development of the technology. This leads to new blockchain systems, and it can therefore be assumed that all currently existing systems will be replaced by improved alternatives in the future.

Barcode scanners and barcode types – functions at a glance

Online marketing in times of Corona