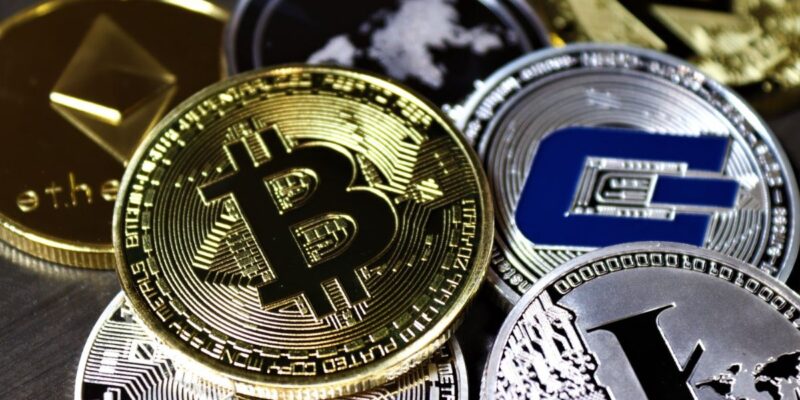 Cryptocurrencies are digital currencies that can be traded against traditional currencies on various online marketplaces (crypto exchanges). This is a highly speculative financial product. But if you want to bring your money into the casino, you should at least have a strategy ready. The crypto market is confusing and the individual digital currencies sometimes differ greatly. While some are backed by a serious software project, others only benefit from the general crypto boom.

This boom was triggered by the rise in the price of the pioneering currency Bitcoin. This started on January 1 at a price of 998 dollars and was quoted at around 13,000 dollars at the end of the year, which corresponds to a price increase of around 1,300 percent. According to a report by the Handelsblatt, analysts at Saxo-Bank even believe that a Bitcoin rate of $ 60,000 in 2018 is possible. But Bitcoin is undoubtedly one of the most important cryptocurrencies but did not make it among the top performers in 2017. We show you which cryptocurrencies had the best performance in 2017 and which risk-conscious investors should pay attention to in the current year.

Interesting Articles: Things to Consider When You Are Buying a Used iPhone.

Cardano (abbreviation: ADA) was only launched in October 2017 and was a surprise among the climbers in the crypto market. The developers want to create a new generation of cryptocurrencies that solves the speed and scaling problems of the first generation (Bitcoin) and the second generation (Ethereum). The renowned development team includes numerous scientists and Charles Hoskinson, one of the co-founders of Ethereum. In terms of technology, Cardano is building on the blockchain, which is to be improved through smart contracts and simple global scalability. With a market capitalization of just under $ 5 billion, Cardano is now number 6 in the crypto market. Last year the rate rose by more than 2,800 percent, from around 0.2 cents to over 70 cents at the end of 2017.

Litecoin (abbreviation: LTC) is a Bitcoin clone and one of the veterans of the scene. The open-source software project was launched in 2011 and ranks fifth in the crypto market with a market capitalization of around 9.2 billion dollars. Litecoin has improved the Bitcoin protocol: completing a transaction is faster and uses less energy. Litecoin recently hit the headlines because founder Charlie Lee sold his holdings. No wonder: After a fireworks display in 2017, the Litecoin shot up from $ 4.33 to $ 217. This corresponds to an increase of more than 5,000 percent.

Ethereum (abbreviation: ETH) is a blockchain network in which so-called decentralized programs can be created, managed, and executed. Ethereum has also made the so-called smart contracts popular. These are automated contracts that self-fulfill when a pre-defined condition is met. In terms of market capitalization, Ethereum is the largest cryptocurrency after Bitcoin with around 52 billion dollars. Ethereum has benefited from the boom in Initial Coin Offerings (ICOs)– an alternative form of financing for tech startups – which are mostly implemented on the Ethereum blockchain. Last year, the price climbed from around $ 8 to over $ 720 – an increase of more than 9,200 percent in one year.

Dash (abbreviation: DASH) is a Bitcoin clone that previously operated under the names XCoin and Darkcoin. It is a cryptocurrency on a peer-to-peer basis, in which the transactions are not publicly visible in the blockchain. Dash has been heavily criticized within the crypto scene for not solving any of the existing software problems that digital currencies are struggling with today. In addition, the founders’ approach to the start of the digital currency is very opaque, which is why some critics suspect the fraud behind it. But thanks to clever marketing measures and the general crypto hype, Dash was also able to record a price jump of more than 9,000 percent and is currently 12th of the largest cryptocurrencies with a market capitalization of around 3.3 billion dollars.

Golem (abbreviation: GNT) wants to be something like a decentralized supercomputer whose computing power can be offered, rented, or used by the public. It combines elements of cloud computing with the blockchain network and is therefore particularly interesting for large companies or research institutions that need more computing power in the meantime to carry out a certain project. The users of the network who make their free computing capacity available are rewarded with tokens of the cryptocurrency. With a market capitalization of around $ 200 million, Golem only ranks 64th in the crypto market. But the price increase last year was huge at almost 10,000 percent: from around 0.9 cents at the beginning of the year it went up to 80 cents at the end of 2017.

Stellar (abbreviation: XLM) is an open-source transaction network that was launched in 2014 by Jed McCaleb, founder of the US file sharing platform eDonkey. It is an extension of the Ripple protocol and is based on the following idea: Instead of making transfers between accounts, as is the case with a Bitcoin transaction, the ownership rights to an account can simply be transferred. This makes Stellar less of a cryptocurrency in the classic sense than of a system for the transaction of digital promissory notes (so-called virtual IOUs). The advantage: Stellar is significantly faster than the constantly overloaded Bitcoin network. With a market capitalization of around $ 4.3 billion, Stellar has worked its way up to ninth place among the largest cryptocurrencies.

Ark (abbreviation: ARK) belongs to that part of the cryptocurrencies that are more software projects than digital currencies. As a spin-off from the cryptocurrency Lisk, the development team would like to build a bridge between all common cryptocurrencies. If a user wants to send a certain cryptocurrency to another, he can simply send Ark Coins and these will automatically be converted into the desired cryptocurrency at the other end. With a market capitalization of around $ 270 million, Ark ranks 51st among the largest cryptocurrencies. Last year, the underdog climbed from around 3 cents at the start in late March to over $ 6.50 per ark at the end of 2017 – an increase of around 22,000 percent.

The peer-to-peer network called New Economy Movement (abbreviation: NEM) was launched in Japan in March 2015 and combines elements of a modern payment system with smart contracts. With a market capitalization of around $ 2.6 billion, NEM is currently the 13th largest cryptocurrency. The NEM developers developed the digital currency so that users not only hold it for speculation but actually use it for exchange. Nonetheless, investors speculated on the price increase of the NEM last year – and were successful with it. At the beginning of 2017, the price was just under 0.30 cents per NEM and then rose rapidly to around 1 dollar. That corresponds to a price increase of almost 30,000 percent in one year.

Ripple (abbreviation: XRP) is a decentralized blockchain network that was designed for international payment processing between large banks. With a market capitalization of around $ 25 billion, Ripple has now established itself as the third-largest cryptocurrency. Banks can trade goods and foreign exchange faster and more efficiently than before via the Ripple network. The network can process around 1,000 transactions per second, which makes it significantly faster than other cryptocurrencies. As early as spring 2017, 75 major international banks were using the payment network, including Bank of America, UBS, and BBVA. At the beginning of 2017, and XRP was still trading at around 0.60 cents. At the end of the year, the price was already 2.50 dollars – a price increase of 36,000 percent within a year.

The Chinese cryptocurrency NEO (abbreviation: NEO) made the largest price jump. With a market capitalization of $ 4.4 billion, NEO is now in eighth place among the largest cryptocurrencies – and the trend is rising. NEO originally started under the name Antshares and is China’s leading open-source blockchain project. It is comparable to the Ethereum blockchain, on which so-called decentralized applications (dApps) can be implemented, managed also executed. After the price fluctuated around the 20 cent level for a long time in 2017, it shot up to around $ 73 in the wake of the crypto boom. This corresponds to an increase of more than 52,000 percent in one year.

Cryptocurrencies with a lot of potential for 2018

The Berlin project IOTA (abbreviation: IOTA) is considered one of the greatest hope of the crypto market. The project was started in June and set out to solve existing problems of cryptocurrencies such as transaction speed, transaction costs, and scalability, while still combining them with applications in the Internet of Things (IoT) area. In contrast to most cryptocurrencies, IOTA does not rely on a blockchain, but on a technology called Tangle. This is a self-regulating “machine-to-machine” communication that enables payment without transaction costs. Based on the market capitalization of around 3.6 billion dollars, IOTA is the 10th largest cryptocurrency.

EOS (abbreviation: EOS) was founded by software entrepreneur Brendan Blumer and programmer Dan Larimer, who is also behind BitShares and Steem. With a financing volume of around 700 million dollars, EOS is still one of the largest Initial Coin Offerings (ICOs)and the seventh-largest cryptocurrency with a market capitalization of around $ 5 billion. EOS is based on Ethereum technology and uses the humble slogan “Decentralize Everything”. The project claims to be serious competition to key companies like eBay or Facebook. The so-called proof-of-stake principle is used to enable the necessary speed of transactions. Although EOS only started in October, the token saw its price rise by 840 percent last year.

Verge (abbreviation: XVG) is one of the big winners of the last year with a price explosion of over a million percent, albeit at a very low price level. After all, it has catapulted the emerging digital currency to 31st place in terms of market capitalization. The development team around founder Sasha Kolupaev focuses on security and anonymity in order to guarantee a high degree of privacy. To do this, Verge relies on a modern blockchain that relies on services such as Tor and the Invisible Internet Project (I2P) to hide personal data (IP addresses, location, etc.). The first phase of the project was completed in November 2017 with the implementation of the Wraith protocol. This should allow users to switch quickly and easily between the public and private Verge blockchain.

Cryptocurrencies are not for laypeople

This list does not claim to be complete and should not be misunderstood as a purchase recommendation. While some of these coins represent a serious software project with proof-of-concept (e.g. IOTA), with others there are legitimate doubts about the seriousness of the project (e.g. Dash). The various tokens are rarely associated with legal claims, such as those associated with the purchase of stocks, bonds, or start-up investments. Any regulation could also take the wind out of the sails of the market and is, therefore, a point that investors must always keep in mind.

A big problem with the crypto market is the extremely high volatility. Fluctuations in the double-digit percentage range are not uncommon. In addition, there is an extremely high cluster risk, as the coins are not sufficiently diversified from one another. As a result, all cryptocurrencies are often in the red on a bad trading day. The market’s dependence on the pioneering currency Bitcoin is still too great. Diversification within the segment is thereby not possible. Cryptocurrencies are therefore only suitable for very risk-conscious investors who are also familiar with the blockchain matter and can technically assess the underlying white papers.

You can collaborate with us:

5 Reasons Why Every Company Needs a Cybersecurity Strategy